Who is
Brittany Lauga?

Brittany has been a strong local voice for the people of Keppel for three terms. She works hard within the Parliament and as a member of Annastacia Palaszczuk’s Government to ensure Keppel gets a fair deal.

An award-winning Urban and Regional Planner prior to politics, Brittany has a strong professional background in infrastructure, urban planning and design, approvals and community development. She is passionate about her community. Brittany is an energetic and experienced Member working hard to deliver for the Central Queensland community.

Brittany is active in the community, working with and for organisations that make a real difference to locals. Brittany is volunteer rural firefighter at The Caves Brigade, a Legacy Legatee, member of the Planning Institute of Australia and Queensland Country Women’s Association (Emu Park branch), Co-Chair of the Parliamentary Friends of Surf Lifesaving, Co-Chair of the Parliamentary Friends of Resources and is the Queensland Representative for Commonwealth Women in Parliament. Brittany is also Patron of the Central Queensland Coast Guard, Emu Park Golf Club, Emu Park Men’s Shed and the Yeppoon Mallet Club.

The Member for Keppel Brittany Lauga has served on the Queensland War on Wrecks Taskforce since 2018. In that time, and with $20m in State Government funding, the taskforce has removed over 750 vessels from Queensland waters. The taskforce is current working on policy reform to achieve responsible boat ownership.

Brittany is always out and about in the community listening to locals. If you see her about come up and say g’day – she would love to hear from you.

Working as a keen member of Annastacia Palaszczuk’s team, Brittany stands proudly her record of achievements since first elected in 2015, delivering hundreds of millions of dollars in education, roads, infrastructure, nursing homes, tourism and events to create local jobs for local people.

She has delivered more police, firies, ambos, teachers and teacher aides, corrections officers, doctors and nurses in Keppel than ever before. 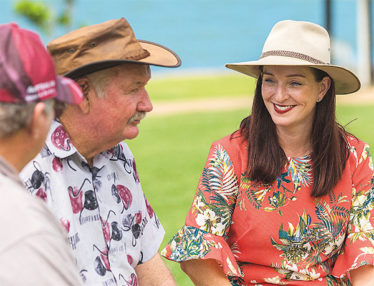 Brittany is always out in the community listening to locals. So come up and say g’day – she would love to hear from you.